Vassilios Kostetsos was born in Athens where he grew up from a very young age. He was involved in fashion. His source of inspiration and mentor was his mother Anna who had opened the first boutique in Greece. There he spent his childhood where he designed his first creations with great success. He started doing his first shows in his adolescence and in the process, growing up, he opened his studio in Kolonaki, attracting the entire Elite of Athens to wear his creations. Along the way, he dressed all the important Greek artists. He has collaborated with the most famous Iconic Legendary Supermodels of the world who walked at the height of their glory in the overproduced fashion shows that she organized in Athens in the biggest hotels Stadiums of Olympic dimensions but also Industrial venues with thousands of people watching them. In 1993 he shot one of the most famous video clips in the world starring the Iconic Supermodel Carla Bruni in the popular song of Passion of Fashion Both its demonstration on an aircraft that was the first in the world and its magnificent display at the central train station left an era. He participated in an international fashion week in Düsseldorf in London at the historic Covent Garden Theater at the International Fashion Week in New Delhi, India but is also the only Greek to show her collections at New York Fashion Week for three consecutive seasons alongside the world's biggest brands. Creations have been worn on the red carpet as well as in photographs in Hollywood International Stars magazines. His performances at the Ancient Herodion Theater in the White Tower of Thessaloniki and at the Numismatic Museum of Athens left a mark as he was the first designer in the world to show at archeological sites in Greece. His last show after the Covid19 season was in Omonia Square which was a huge success with its originality. 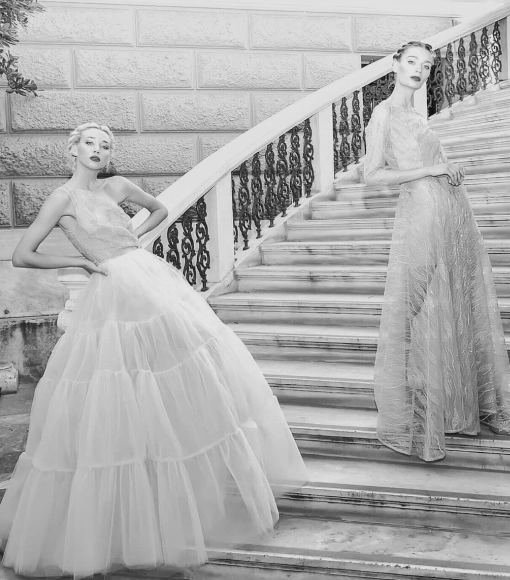